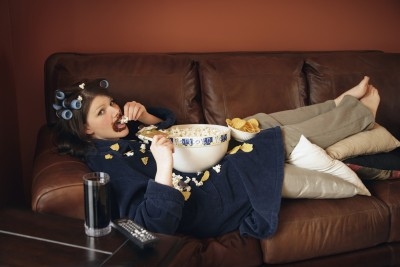 I feel like crap. It’s been a very long time since I have felt this way. If I did not know any better I would swear it was a hangover. Today was especially brutal. I spent the better part of it attempting to stay awake at my desk while fighting off a headache and what felt like dehydration. The thing is, I have not had a drink since last Thursday. And yet, I only vaguely remember the weekend. No, it was not a wanton abuse of alcohol or drugs that led me to this sad and sorry state. It was something much worse. I basically overdosed on reality television. Basic cable reality television. Two days of it. I feel so very ashamed.

You see, I don’t have cable at home. I tell myself it is because it costs too much money, but, really, it’s because I am a sucker for any random marathon of Law & Order or Project Runway or really any reality show that incessantly leads into every commercial break with an emotional and misleading cliffhanger. So yes, having basic cable would cost me. But not so much money as my dignity. But I was dog sitting in Georgetown, caring for the sweet and lovely Maggie, while her dads, Craig and Jack, were away and thought, oh, let’s just see what’s on.

It all started quite innocently. I stumbled on a mini-marathon of Extreme Couponing on TLC. It was inspiring. I wanted to clip coupons and save money. I wanted to never pay full retail price again. I did not recognize it at first but it was that first high, that initial burst of excitement that I would spend the rest of the weekend looking to replicate. it was the gateway marathon. That’s how it starts. Something innocent, something well-meaning, something that would turn into a giant weekend of nothing.

This was followed by a day and a half of random marathon surfing. I watched Project Runways I had seen several times before even giving up cable three years ago. That led to a mini-marathon of Real Housewives of New York, America’s Next Top Model and culminated in a three-episode arc of Real Housewives of Orange County.  It was the equivalent of waking up in a strange place and having no clue how I got there. At least, what I imagine it would be. By the time Andy Cohen and Watch What’s Happening Live came on, I was rocking back and forth, hands wrapped around my knees and crying. Too much Vicki Gunvalson will do that to even the most hard-core reality show watcher. I hit my proverbial bottom. It wasn’t pretty.

I soon fell asleep mid-immediate re-run of that night’s show and awoke this morning vowing to never do that again. I staggered through my day feeling hollow. I kicked myself for wasting an entire weekend living my life vicariously through incredibly sad, sad, vapid people (that would be the RHONY and RHOOC respectively). What about my blog? What about my weekend in the quaint and tony G’town? What about my self-respect?

So here I am, starting over. Call it a moment of clarity. It’s Monday night, I have a whole new week in front of me. A week of inspired posts to write, books to read, walks to take. An entire week to be productive with errands, chores and finishing to do lists. But before I start all that, I reaaaalllly want to watch the repeat of the Real Housewives that aired twice yesterday. But don’t worry, I can stop anytime I want. Really, I can.

And thankfully, Craig and Jack are back on Wednesday.