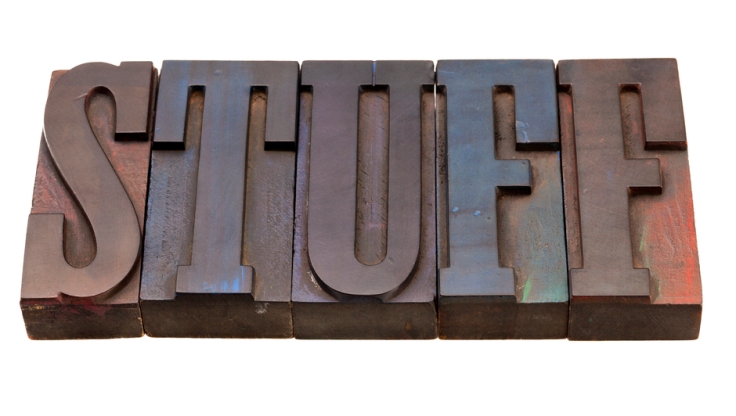 While preparing my home for the painters I realized something rather profound. I have too much stuff. I mean way too much stuff – more stuff than any one person should own – EVER. Don’t we all? When I arrived in DC many years ago I had but a car load of possessions. I find myself now with well more than a condo and additional storage unit’s worth. I live alone and have six cutting boards, five cooling racks and two, yes two, Bundt pans. Really? Okay, Sadie lives here too but I am 99% sure she has not used a cutting board or cooling rack since moving in. I can’t be so sure when it comes to the Bundt pan.

So I stepped back and looked over all my stuff. And I realized I have too damn much of it. So I am declaring war on stuff – superfluous stuff. And most objects that are classified as stuff are, by nature, superfluous. Stuff like throw pillows, trivets and napkin rings. Important stuff is different. I have never seen food, shelter and clothing referred to as stuff. They are important enough to be referred to as what they are – food, shelter and clothing. I have never uttered the phrase, “as long as I have a roof over my head, food on my table and a throw pillow on my sofa, I will be okay.” And I am confident I never will.

Don’t get me wrong, I believe in appreciating the finer and the little things in life. But sometimes finer does not mean more precious. And more often than not, little things, like bookends in the shape of the Eifel Tower, often get in the way of the bigger things, like booking a trip to see the Eifel Tower. So I will slowly go through my “stuff” and try not to add up the money spent on them. I will go through my stuff in my condo and my stuff in my storage unit. Some of my stuff it will stay but most of it will go. And chances are, to a more needed home than my own.

One thought on “Stuff is just another word for most of the crap I own.”